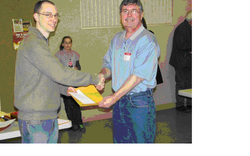 Name: Dave Brown        Age: Born in 1958
Hometown: Trenton, Ontario, Canada
Shooting Finger: Right hand, index finger
Known For: Helping to grown the game of crokinole in the Quinte area
Club: Quinte Region Crokinole Club
Profession: Retired
Style of Play: Offensive
Favourite Board: Willard – Green
Singles or Doubles: Singles (you can not blame anyone but yourself when you lose and take full credit when you win).  I do enjoy playing doubles particularly when my partner is my son Matt.
Favourite Shot: Anytime I make 50 points on a shot (knock 2 opposition pieces out of the 15 area and my shooter ends up in the 20 hole…………..”Ya Baby”).  Unfortunately it does not happen as often as I would like it to.

My parents introduced crokinole to my siblings’ and I back in the 1960s.  Like many crokinole boards it was played often for a period of time then packed away somewhere never to be seen again (just like my Bobby Orr rookie card).  Later in life my father-in-law Leonard Chard took up wood working as a hobby as he entered retirement from many years of farming in Sidney Township.  Some where around 1987 a good friend of mine, Tabor Tefft spotted an article in a Harrowsmith magazine that included plans on building a crokinole board.  Tabor presented the article to Leonard who took on the building project and the result was many hours of crokinole played at my in-laws particularly with my brother-in-law Len.  Over the years the interest spread to other family members and friends, which resulted in the formation of the Quinte Region Crokinole Club.