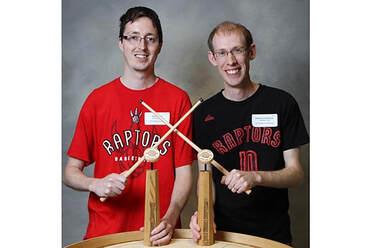 Known For: Making the jump from cues to fingers and his tournament day pink dress shirt.

Style of Play: Offensive and Defensive

Favourite Board: Any board that is quick and isn’t stingy with the 20s.

Favourite Shot: I enjoy putting my opponent in a nice Dunbar position (hiding it behind a peg, or deep in the 5-circle forcing them to go over the hole.) Also coming in off pieces in the 5 for a 20 is always satisfying and often helps me get in my opponents head and sways the round.

Singles or Doubles:  I prefer singles play as it suits my strengths best (getting on a roll with my 20 shooting); however I appreciate the extra strategy that a good doubles match provides.

Although Andrew knew about crokinole previously, he didn’t actually start playing until one of his housemates brought his parent’s Wagler board home to share in 2011. They quickly developed a ‘House Crokinole Ladder’ playing with cues. After watching the crokinole documentary and finding out about the World Crokinole Championship, they all signed up for cue doubles in 2011 and had a fairly successful showing.  In 2015, enjoying the game so much and only having one cues event available to play each year, Andrew made the switch to fingers.  He found immediate success and after a series of top 5 finishes he broke through with 2 victories in the 2018-19 NCA season.  Andrew is also known for his alternative crokinole terminology.
Andrew claims Jon Conrad is his crokinole idol, stating Jon is a legend and one of the first players he played with and against when starting out at the Waterloo and St. Jacob’s clubs.  Having the chance to team up with him in a couple of doubles tournaments has been an honour for Andrew.

Andrew fears no opposing player, but he claims Justin Slater always provides the biggest challenge for him, as Justin’s open 20s are so good, and he is so good at rolling to the perfect defensive spot when he has the lead. Other tough opponents would include Roy Campbell (when he is on his game, he can make all the regular shots PLUS make incredibly difficult shots seem routine) and Tom Johnston, who always plays Andrew tough.

Crokinole Achievements
Cues: Fingers:
Crokinole Depot where Crokinole is all we know!